Potentially offering help for those who suffer from extreme weight loss caused by a host of debilitating ailments, the CBG cannabinoid (Cannabigerol) has recently sparked the interest of the scientific community as a safe and effective means of stimulating appetite.

That’s right, yet another one of marijuana’s lesser-known cannabinoids has received scientific vindication and a clean bill of health. Found to work synergistically with CBDA and THC, the CBG compound has recently been credited with stimulating appetites without some of the nastier side effects of the Western world’s toxic pharmaceuticals.

Long-praised as a non-psychoactive cannabinoid that eradicates and inhibits bacterial growth, reduces inflammation, inhibits tumorous cell growth and obstructs the growth of deadly cancer cells, the cannabis compound Cannabigerol (a.k.a. CBG) has now been scientifically recognized as a safe and effective appetite stimulant, according to research conducted at Berkshire’s University of Reading that was recently published by the U.S. National Institute of Health.

After extensive research into the study’s stated objective of examining “the effects of CBG on food intake and feeding pattern microstructure,” the test subjects were administered either the CBG cannabinoid or a placebo substitute and assessed.

As the DEA announced their intention to keep marijuana listed as a Schedule I narcotic on Wednesday, this long-maligned plant, backed by the political henchmen of Big Pharma and restricted by its Schedule I status within the Controlled Substance Act, has many beneficial secrets to share. Despite those inspired and thoughtful politicians who voiced opposition to marijuana’s current classification, cannabis has again been relegated to the shadows of ignorance and fear.

Understanding that “knowledge is power,” we have included the below cannabinoid chart that correlates which cannabinoids help with which ailments: 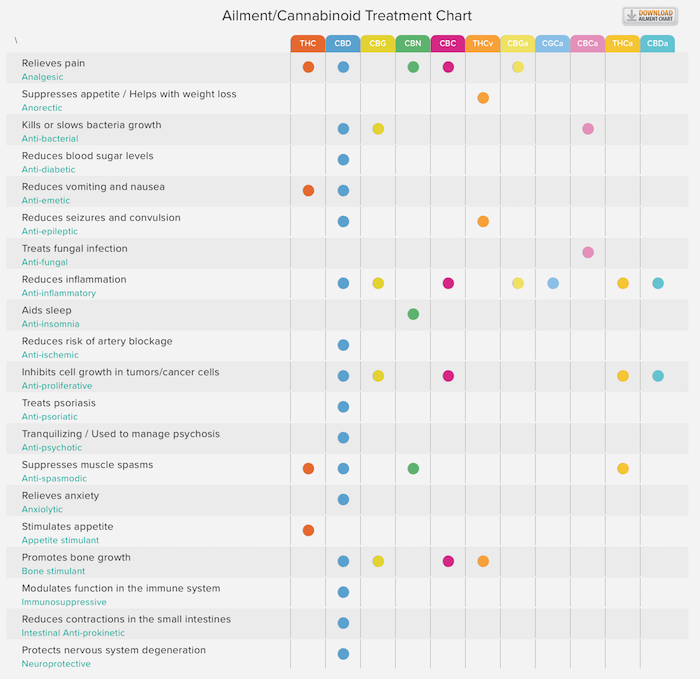